MTTs are the most popular type of poker game these days. Often in TV we see some big hands that don’t represent the point of view and the strategy of the players. For example we see a pro taking a stub at the pot with a bluff, but TV doesn’t show how many hands this pro played with he player who was bluffed or what was the range of hands and the poker style of this player. Anyway there is a general strategy i follow in MTTs that will help in most of the cases make a deep run and to make it in the money.

Early stages of a tournament

Most of the MTT’s guides and books suggest that a player especially if he is inexperienced should be extremely tight. This is not a bad strategy for the early stages of a tournament since its very cheap for the players to see the flop so we see a lot of action in these stages and often we see very strong hands cracked by rags. That happens because a lot of bad players will raise or call a raise with very marginal hands hoping to catch something on the flop. It happens all too frequently in the early stages of the tournament If the blinds are 10/20 with starting stacks 2000 or 3000 chips a raise of 4 or 5 times the big blind won’t mean something according to the stacks. There are many times i see a player raises 4x the BB in these stages when he has AA or KK and losing because a lot of players see the flop and the made trips, straight or flush.

I suggest at these stages to play very aggressively only the big hands (JJ, QQ, KK, AA, AK – only if hits the flop) and at least a raise 15x the BB. Wait for the blinds to go up and don’t get involved in situations you can’t escape. Even playing those top 5 hands, a bad beat can still happen to you, but a lot less.

Another strategy at the early stages of a tournament but for more experienced players is playing more flops with starting hands that can lead to very strong hands but only when its cheap to see the flop. Those hands are suited connectors and small pairs hoping to hit hard the flop. Even if you have top pair don’t get involved in big pots unless you have trips, flush or a straight.

Middle stages of a tournament

In these stages the fish are either gone or have some huge stacks if they were lucky at the early stages. Observe the table and try to find passive players that you can steal their blinds and try to get information about all the players of the table so you can play a pot against them with some info on their playing style from which you can take advantage.

Also it’s time to loosen up and play more hands and try to gamble a little bit in order to make a healthy stack that will allow you to make it to the final tables. Don’t play like a maniac, I just say that you can play with more marginal hands (like QJ or K10) but try not to get involved in very big pots if you think you are beat.

Later stages of a tournament

So we finally make it in the money though there is a huge difference between the prizes of the final table and the prizes we get if we don’t make it to the final table. My advice is to loosen up more if you have a good stack and put pressure to the short stacks even if that means that you have to put them all in if you have a decent hand.

Also be very cautious when playing with big stacks and try to keep the pots small unless you have an excellent hand. Again don’t play like a maniac just try to take advantage of your table position and your stack and take more risks because your target here is to make it to the final table.

If you are short-stacked 15 or less BB you should go all in with any good pocket pair (77 and higher) or with hands like A 10 and higher, if you catch that type of a hand in middle or late position. Now if you catch a monster hand try to play it regularly in order to take more chips from your opponents.

I hope that this guide will help you improve your play but consider that even if you do everything right you can’t expect to be in the money every time. The most winning players in MTT’s are ITM in a percentage of about 10-20% but because of their ability to finish in high positions in those tournaments their earnings are significant. 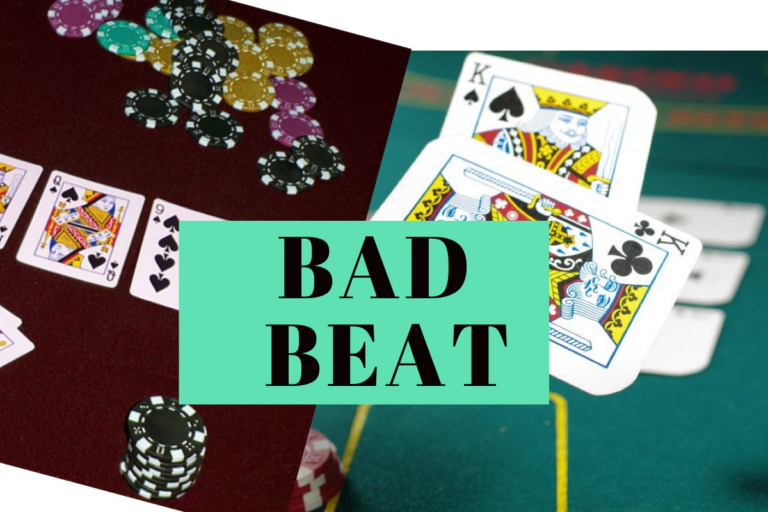 When playing poker taking bad beats is part of the game. For many it is the reason they play, for those stories you have to tell people afterwards. The “nearly” kind of stories, much like the fisherman’s tales of “the one that got away”. For others bad beats are agony and cause untold pain during…

Patience is a virtue Patience is the first thing any cash game player must think about before sitting down and thinking about the specific strategy of the game. In poker there are so many skills that could help you win money in the game but patience is the top skill for anyone to have to win playing…

Bankroll management is the process in which a player decides which percentage of his money should risk in any gambling game and especially in Texas hold’em poker. If you like to play just for fun then you can play as much as you want, but there are certain rules to follow if you want to…

Pocket Jacks were not meant to be played easily. Here are a few instructions when you get dealt pocket jacks. If you are playing in a low limit game then you have to raise with Jacks pre-flop. You do that because the more hands you can get out, the better chance they have of holding…

Early Position (Under The Gun) The hardest position to play in any game of poker, with no exceptions is the first position, more commonly known as under the gun (UTG). The player sitting under the gun has to act first as soon as the cards are dealt. This position is the position directly to the left…